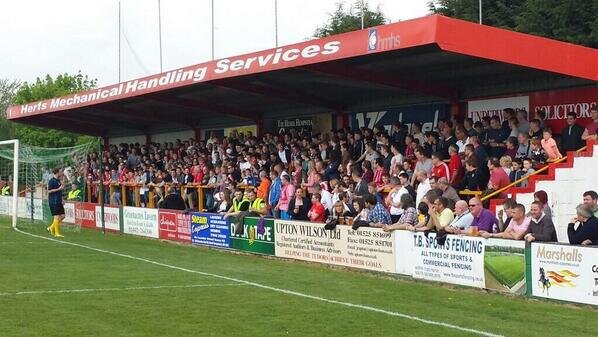 Non League supporters are seen as some of the most diehard in Football. Cold Tuesday nights in December are just a average matchday for us non league fans. Below are our top ten things only non league fans will know. ( Original Article )

The old saying ” One Man And His Dog” is quite true at most non league grounds across the country. We love our furry friends coming down to West Street.

Typically, when a big team like Manchester United gets drawn against someone like Coggeshall or one of the national league sides the United fans will write off, but sometimes that bit of magic comes! Like they say magic of the FA Cup. That competition always offers a bit of hope to clubs struggling to get by financially. Plus, it’s a huge reward for the fans, especially when they’ve been supporting a team through thick and thin.

3. Knowing everyone at the club.

Everyone from the fans up to the club chairman, after a couple of seasons you don’t see anyone you don’t know and it’s impossible not to nod and say “You good”, and comment on the clubs performance. Normally if your having a bad match the chairman normally agrees with you.  You get to meet a range of incredible people who you’d never cross paths with otherwise. No one can knock that.

Most teams in Non League have had a household name turn up to the matches. Weather it’s Antony Joshua or more locally to us Olly Murs who is a frequent face at West Street it’s still class the way they sit with the fans and at that point the celeb status goes out the window and you just natter about football.

5. Having a cuppa with the players post match. Win or Lose!.

It’s a common sight to see players after the match win or lose come into the clubhouse with the manager to have a pie or chips. At this point they normally interact with fans and have a good chat about the game. Banter gets thrown about and a good old jolly chit chat follows. Trust us, that’s not something you get in the upper tiers. Being able to console or compliment a player in person is something special. Plus, it means even more when you can see proper joy or disappointment in their eyes as well. You get to see upfront that they care, just as much as you do.

The desperate Dad. Father of one of the younger players, he spends the entire match shouting and rawping at him in the full knowledge that his lad is never going to be quite good enough to ‘make it’. That trial at Brentford will never come around again.

Oh the grounds! Yes they could use some work, things could always be a little bit better, but by crikey that would ruin most of the charm!

The ancient dark art of standing at a football match is alive and well in non-league football. It’s no ‘yellow wall’ but you just can’t beat the freedom of movement (and lack of forcing 20 spectators to stand up while you shuffle past because you need a piss 33 minutes into the game).

9. Dealing with called off matches

It’s incredibly rare for a Premier League game to get called off, but look further down the pyramid and it’s altogether too common. Between October and February there’s a constant fear of a match being called off last minute due to a frozen or wet pitch. It’s always such a disappointment and you feel at a complete loss as your plans fall through and your Saturday/Sunday are ruined. Been looking forward to it all week!.

But on top of that, it means a mad rush of games towards the end of the season as the postponements add up. Suddenly, you’ve got two games a week, three times in a row. That’s a huge amount of work for part-time players and it makes everything 100% tenser. What was once a good promotion run can soon turn into a relegation battle.

10. Just the feel of Non League

Finally, we love Non League. Cancelled trains. Broken floodlights. Flooded toilets. Sold out chips. A ten-nil decimation. Crashing out of the cup. Relegation. Freezing evenings. Wet weekends. Low turnout. High expectations. Tinny speakers. Sloping pitches. Half-built stands. A third postponement in a month. No action replays. No money. There’s no doubt about it: non-league couldn’t be any other way, and we hope it stays like that. To many thousands of football fans across the country this is the one day a week where they can escape the home life and forget lifes troubles for 90 minutes. Having a beer with freinds and enjoying the atomsphere. It might be tinpot but it’s our tinpot ;).

We hope you enjoyed this article. This is part of our new section of football related articles. Aside from our normal club news. If you want to learn more about Coggeshall United please click here